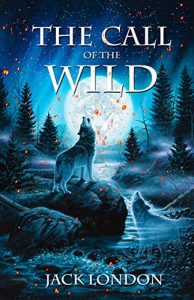 During the gold rush, Buck, a large four-year-old St. Bernard mix is used to his leisurely life living with the family of a judge on a large property in the Santa Clara Valley.

He’s kidnapped by Manuel, one of the workers on the property who has a gambling problem, and sold to men who transport him north to Alaska into a brutal life as a sled dog.

He gets beaten into submission immediately on arrival by a man with a club. A lesson that sticks with him for life. And almost immediately he sees other, weaker dogs get killed and eaten by the rest of the starving pack.

Once he’s put on a sled team, he learns by necessity to stick up for himself by fighting the other dogs. He learns how to live with hardly any food, to ignore pain, to sleep in the freezing snow, and to work to exhaustion and near death on a daily basis.

He forgets all moral conerns. All that matters is survival. He learns how to steal and kill to survive. He becomes a hardened, wild, ferocious, primitive beast. The transformation almost kills him.

After his sled team is bought by a clueless, inexperienced three-person team who have no respect for the suffering he’s been through and his need to recover, he gets saved by John Thornton, an experienced woodsman.

While living with John Buck learns what it’s like to truly love someone. He develops a deep bond with John that he never felt for the judge in his old life.

But even as he develops his love for John, he still feels the call of the wild. His primitive side that lives to kill, hunt, and be wild and free has been awoken and can’t be silenced.

He starts going out on adventures through the forest to be wild. One one of these adventures he meets a wolf, and is invited to join him. But he remembers John Thornton and goes back to him.

John eventually gets killed by Indians. Buck goes wild with rage, hunts them down and savagely kills a bunch of them. The survivors run away terrified and bring the story back to the tribe.

They start telling stories of a Ghost Wolf and notice how the breed of wolves changes over the seasons. Some of them start to have splashes of brown in their coats. And Buck becomes a part of their legend.

This is another book I found on a list of must-read literature. It’s a classic and I found a copy of it on Project Gutenberg. That’s the version I read. So you don’t have to buy it through Amazon.

This story is emotional and sometimes difficult to read. The brutality of the life of a sled dog was something I never knew about. The harshness of the story reflects on the harshness of the experience of those who lived it. I don’t know how accurate this story is, but I respect how rough that life must have been even if it’s only slightly accurate.

Being an animal-lover I empathized with Buck. And that was one of the reasons I was looking forward to reading this. I enjoyed seeing life through his eyes, and watching his transformation.

I was consistently on edge wondering what would happen next, and hoping things would work out in Bucks favor. There were a lot of surprises in this book, despite how short it is.

I think this would be good for animal and adventure lovers. It’s also rough and gritty. It’s a great story and it’s so short and low commitment you have no excuse for not reading it!