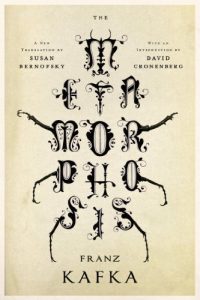 Gregor Samsa. Traveling salesman. Lives with his parents and sister who rely on his financial support. He’s worked his way up over years to his current position and he’s able to support all of them comfortably.

He wakes up one day to find out that he’s been turned into a giant human-sized insect. The whole story revolves around the months-long sequence of events surrounding his and his families discovery of his metamorphosis, struggle to come to terms with it, and ultimate rejection of it.

At first they’re terrified of him, but they assume that the creature is Gregor, and expect him to turn back into human Gregor any day. So, in anticipation of that happening, they do their best to tolerate him.

His sister is the only one who shows him much kindness. Now that he’s unable to communicate with them in any meaningful way, she makes the effort to figure out what kind of food he likes, to clean up after him, and do whatever small things she can do to make things comfortable for him.

Over time Gregor’s family becomes unable to deal with him. Combined with their new financial stresses, because he’s now unable to financially support them, they start to reject the idea that the creature is Gregor at all.

The final straw comes one evening when Gregor and his father get into a struggle in the kitchen. His father throws an apple at him which lodges in between two sections of his body. It becomes a chronic injury, and eventually kills Gregor.

His family finds him dead in his room one morning and they’re unanimously glad and relieved. They make plans to move out of their large apartment—that they can no longer afford and don’t need—and go on a family vacation by train out of the city.

Strangely, this feels like a new start for Gregor’s family, and a positive change in their life circumstances.

I’ve been wanting to find new books to read, and have been looking for suggestions. I found this book on a list of must-read literature.

I’ve read that Franz Kafka was a troubled guy. I don’t know if that’s true. But this is a strange and tragic story that seems to me to be about alienation, strained relationships, and fear of not being accepted.

There’s also an economic component. Gregor worked hard to support his family, and despite all that, they ended up despising him, killing him, and then being glad when he was gone. Through no fault of his own, and having done all he did for them, they still turned on him.

This must be commentary on common themes in Kafka’s life. Gregor was frustrated, isolated, and lonely in his new form. He couldn’t communicate with his family. This seems like it might have been a creative way to express the authors own similar feelings.

I don’t know any of that for sure. But that’s what I took away from it.

Someone who likes strange, emotional, and slightly dark stories.