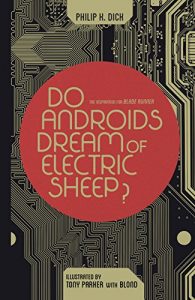 2021: Earth has been destroyed by nuclear war. Almost all animals have gone extinct due to nuclear fallout. Real, living animals are incredibly rare and expensive. Artificial (electric) animals have mostly taken their place or are all most people can afford. Having a real, live animal is a status symbol.

Humans have almost entirely moved to Mars. People are incentivized to move to Mars by being promised an android to help with their work. Those who stay behind to continue living on Earth are viewed with skepticism.

Androids do all the work of Mars colonization, but some of them make their way back to Earth to hide among the human population.

Rick Deckard is a bounty hunter for the San Francisco Police Department. His job is to retire (kill) Androids—Andys—that have ilegally made their way back to Earth. And up until the newest generation of Androids was released, they were easy to detect.

There were reliable tests to detect if someone was an Android. They relied on empathic response to questions, and worked because presumably, as machines, Androids don’t have empathy.

The Rosen corporation makes Androids, and it’s possible the newest ones powered by the new Nexus-6 chip can pass the most reliable empathy tests and go undetected in the human population. While investigating, Rick meets Rachel Rosen, who may or may not be an Android.

John Isidore, a special, a “chickenhead,” can’t emigrate to Mars because of his cognitive disability. So he lives alone in a large abandoned apartment building, and repairs electric animals for a living.

He meets Pris Stratton, a cold, emotionless girl, who turns out to be his only neighbor in the building. She has just recently moved into one of the abandoned apartments.

Second on Deckards list of androids to retire—after retiring his first of the Nexus-6 models—is Luba Luft. In the process of retiring Luba, Deckard realizes he feels empathy for her, and is incapable of feeling empathy for a human he suspects of being an android.

This confuses Deckard, and causes him to start to question his feelings, why he does or doesn’t feel empathy towards someone, or something, and what that says about him as a person.

His feelings of empathy towards Andy’s continues to deepen, and he becomes more confused.

After Deckard comes to John’s apartment building looking for the final three Andy’s and kills them, John is understandably sad, but mentions he’s going to move out of the building to be around more people.

Deckard is disappointed that he now has nothing to do. And after all that this experience has done to him, decides that he doesn’t want to do it anymore.

I’ve been a fan of the movie Blade Runner for as long as I can remember. And I’ve always known that it was based on this book.

It’s been on my list of books to read for a long time, and I’ve recently decided to start reading more fiction. This one was an easy choice.

The book seems to be about the nuance of human connection and what it means to have emotional connections to other beings (humans, animals, androids).

There’s constant contrast throughout the book between connections with electric animals, real animals, androids, and people. And these connections have varying depth which doesn’t seem to correspond to whether or not the person or animal is human or artifical.

John Isidore has no real relationships with any humans, but when he meets the Andys he wants to be friends with them because he craves the connection. It doesn’t matter to him that they’re androids.

And when they’re all dead, they seemed to have had a lasting effect on him because he decides to leave his abandoned building and seek out human companionship.

Rick Deckard struggles with his mixed feelings. He’s supposed to feel empathy and connection to humans and be cold and emotionless towards androids. But that doesn’t turn out to be the case.

His feelings toward them is much more nuanced and complicated.

Anyone who likes stories about technology, dystopian futures, and slightly dark explorations of the human experience.